SPOmPosted on February 1, 2018 Posted in Dog Walking No Comments 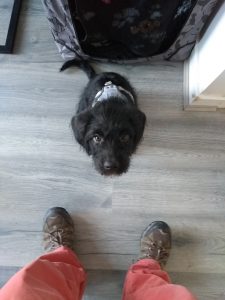 I have been following the arguments and writing about electronic shock collars since the Kennel Club, KC first campaigned to ban them. This was at the turn of the century. I also remember reporting on the formation of the Electronic Collar Manufacturers Association, ECMA (in 2004). This dubious bunch got together to defend their products against a general public outcry.

Eighteen years on and my country still allows their sale and use. Maybe now, after many false starts and following the Scottish Government’s announcement on 24 January that it would be instituting a “prompt and effective” ban, we may be about to see that implemented UK-wide.

It’s time for England to join its Scottish and Welsh neighbours in their condemnation of these barbaric dog training methods. (The Welsh Government banned the use of shock collars way back in March 2010.)

What we need now is a UK-wide ban on their sale.

The British Veterinary Association, BVA welcomed the Scottish Government’s decision to ban the use of electric shock collars and other electronic training devices.

“This is a real win for animal welfare. Electronic training devices have a negative, painful effect on dogs and, as the Scottish Government has now recognised, can cause unnecessary suffering.”

The BVA continues to push for a ban on the sale and import of electronic shock collars across the UK.

“With effective bans on the use of these devices in Wales and Scotland, we want to see action taken in England and Northern Ireland, including a UK-wide ban on their sale and import.”