There’s a Mountain to Climb..

SPOmPosted on August 3, 2017 Posted in Pet Sitting No Comments 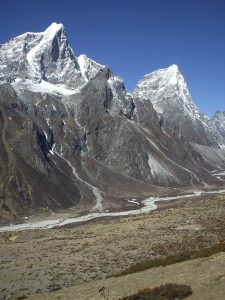 Marketing of Pet Sitting: I am now an old school pet sitter..

..a bit of a man-out-of-time type when it comes to developments in the marketing of pet sitting services. My business, Paws Indoors arrived early into this new market in 1991. We were part of a small, pioneering cadre of businesses in the UK that had spotted a need for some new sort of holiday-care for pets, something which improved upon the existing offer from catteries and kennels.

By the year 2000 this service was commonly known as “pet sitting”.

The initial idea occurred over a quarter of a century ago and I remember submerging myself in the detail of how such a business would work. There was no template and no one to ask. No Internet to refer to. No guidance at all. There was also no belief in the proposal. Not from banks nor from local start-up funding organisations.

To be fair, I didn’t look like a great prospect. My background was in Land Surveying. I had spent my life up to that point travelling around the world making maps and I had no previous experience with animals other than my own pets, nor any concept of how to run a business.

Yet there was one person who seemed to get my idea.

Marketing of Pet Sitting: But some background first..

In the 1980s a pervading zeitgeist was captured by the comedian, Harry Enfield with his: “loads ‘a’ money” catch phrase. This, after Maggie Thatcher had announced that there was “no such thing as society”. It seemed to me that everyone was out for themselves. To me, scrabbling around for a business idea, I figured this meant that there was no such thing as community. I wasn’t right about that of course, but I ran with the thought that neighbours didn’t have as much time for each other anymore.

So, if you hate the idea of putting your pets into boarding, what were your options? No family around, no neighbours to call on. Everybody’s busy.

That was my argument. And the one person who seemed to get it was an advisor I met at the business start-up support organisation in Newcastle Upon Tyne: Project North East, (PNE). That person was Nicky Dickinson. Her particular interest in my business proposal stemmed from her background as a judge at Kennel Club pedigree dog shows. She also saw the sentiment and the need and she supported me through the first few years of getting established. A long time has passed since we last met but I will be forever grateful to you Nicky for grounding me and guiding me through those early years..

Marketing of Pet Sitting: Then technology..

When the Internet finally arrived in the UK: dial-up, Compuserve, Microsoft Windows 3.1, (remember any of that?), I discovered that pet sitting, (I had been calling my business idea a ‘neighbourly service’), was already at least a decade old in the States! Pet sitting it seemed, was what my business would have to become.

I used what I had discovered from the US to begin drafting a set of technical procedures, trying to encompass all possible situations that you might come across as a pet sitter; a missing cat, a burgled property, a delayed flight, and so on..

Without a standard insurance policy for pet sitting I sat down with a broker and within a few days we had one drafted and we put it to his underwriters. I needed legal agreements for clients and a contract of service with my pet sitters. All of this was brand new ground. And eventually, out of the unknown, our Paws Indoors pet sitting business was created. I was very proud of it.. And it has served me well – from the age of 30 to the age I am now (which, okay, is 55).

Marketing of Pet Sitting: I’m so far behind the times..

I recently joined a pet sitters’ forum on Facebook, a members only, pet sitters only, group. Its origins are American and it mainly discusses American pet sitting issues. In the short time that I have been in the group I have learned that pet sitting in the US continues to lead the UK version by a long chalk, and differs from the UK significantly in many ways. The US is always quick to embrace new technology.

The tech has raced ahead. I have a huge steel filing cabinet in my office in which are locked all of my clients’ (hundreds of them), details. I am a stickler for security and discretion where my job is concerned. But it’s all on paper, and that is not what the market expects these days. So my goal now is to get to grips with the new, smoother ways of providing this service, and at the very least, passing my old filing cabinet on to someone even slower than myself!

The market is also almost saturated now in the UK and I recognise I can’t stand still and watch it from the sidelines any longer if I want to remain on the inside. So my blog, at least in part, over the next year or so, is going to be the story of our transformation from a paper-based old hack pet sitter from the last century to something that can at least give some of our younger competition a cause for concern!

My daughter, Kerren has a Masters Degree in Marketing from Newcastle University. She moved me in this direction. She shoved a few times if I’m honest, trying to make me understand modern marketing of pet sitting. I have kind of got it now Kerren. That SEO lecture you dragged me to last week was well worth the effort.